Pension warning: Britons could be entitled to a Stamp Duty refund worth £10billion 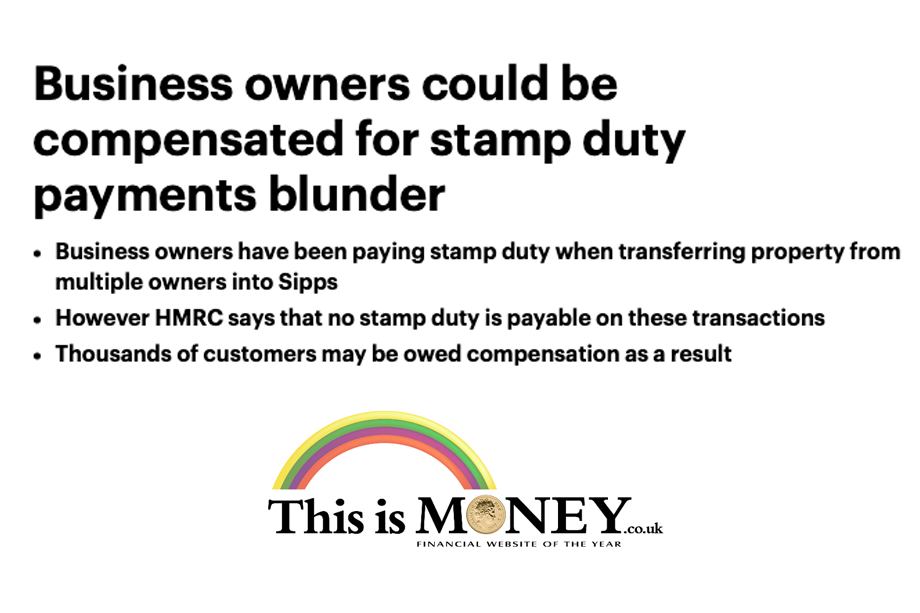 Read the article on This Is Money

“Thousands of small businesses could potentially be owed refunds after an industry-wide error forced customers to unnecessarily pay stamp duty.

Institutions across the pensions industry have been telling clients to pay stamp duty when transferring property from multiple owners into Sipps or SSAS pensions, according to advisers Cornerstone Tax.

But according to HMRC stamp duty does not need to be paid in this case, meaning potentially thousands are owed back tax that they didn’t need to pay.

Even the top 50 pension providers, accountants and IFAs were found that to be giving out the wrong advice to customers, according to Cornerstone Tax.

The error means that not only did clients lose money from their pensions in the initial tax payment, but also lost the potential to invest that capital, thereby losing any potential growth in the ensuing years.

Cornerstone Tax says it estimates over 120,000 people may be owed compensation of up to £80,000 each as a result – though these numbers are partly based on anecdotal evidence.

David Hannah, principal consultant at Cornerstone Tax, said: ‘We have spent the last year or so researching this issue. The scale of it and the industry reluctance to even acknowledge that there is a problem has been staggering.

‘We have contacted over 50 of the top pension providers, accountants and IFAs in the country and thus far have not received a single correct response, highlighting the prevalence of ignorance to this issue in the industry.’

Those impacted may be able to claim compensation from HMRC. If the transaction was more than four years ago however, those affected would have to claim against their adviser.

Andrew Marr, a tax partner at Forbes Dawson Tax Specialists, said: ‘The situation of transfers to and from partnerships and connected parties is well known to tax advisors across the UK and is covered by HMRC in their manuals.

‘I am surprised to hear that this issue does not seem to be on the radar of pension advisers.’