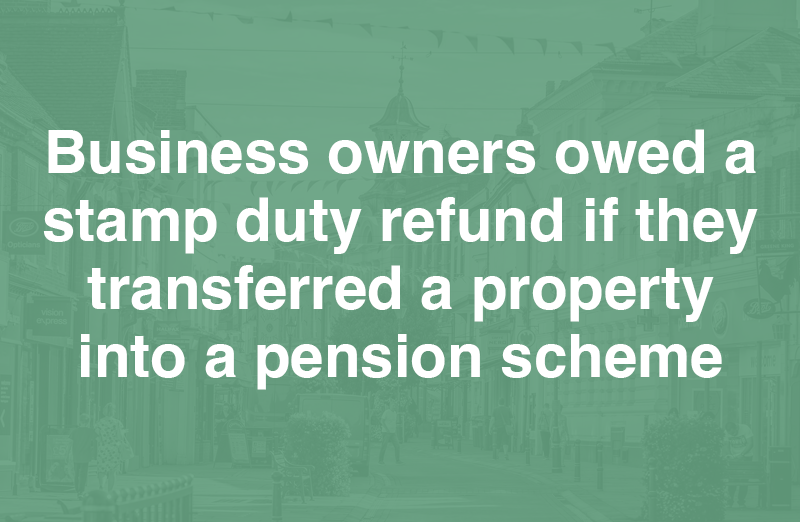 Read the full article on This Is Money

. Possible exemption is on commercial properties transferred into Sipps and SSAS

. It only applies if the property is jointly owned by multiple parties

. Experts say many pension trustees and financial advisers were not aware

. Thousands of self-invested pension savers may have been affected

Thousands of small business owners who have sold a commercial property into their self-administered pension scheme could be due a stamp duty refund, according to tax experts.

The refund could see these niche pension savers paid back tens of thousands of pounds in tax, depending on the value of the property – but it only applies in a specific set of circumstances.

Business owners who have moved their commercial properties into self-invested personal pensions (Sipps) or small self-administered pension schemes (SSAS) could be eligible for rebates in some cases.

Experts have suggested that the property must have been owned jointly – for example by a husband and wife – or by an owner-managed company, for the possible exemption to apply.

The pension scheme the asset is being sold to must also be in the name of the same partners, or people connected to them.

The potential for an exemption has been confirmed to This is Money by the Association of Member-directed Pension Schemes (AMPS) and by specialist tax consultancy, Cornerstone Tax.

All three said that the rules surrounding this were complex, and recommended that anyone who thinks they may be exempt or may have wrongly paid stamp duty seeks specialist tax advice.

It is believed that, due to the complex and specific nature of the rules, pension providers and financial advisers may have inadvertently provided incorrect advice to their clients on this issue in the past.

Solicitors and other advisors are thought to have told their clients stamp duty needed to be paid on these property transfers, when that was not the case.

Baroness Altmann said: ‘When it comes to pensions there are always complex issues.

‘There is this thinking within the legal industry that, if you’re a conveyancing lawyer and a property is transferred, that is a property transaction and you just pay stamp duty. But there a lot of exceptions that aren’t well-known.

‘It seems even the biggest law firms have not quite got to the bottom of this.

The AMPS, which represents pensions consultants, actuaries, lawyers and insurance companies, plans to issue guidance to its members on the subject shortly.

Martin Tilley, its interim chair, said: ‘We will be issuing a guide to our members suggesting that, because it is so individual and so complex, they take their own specialist tax advice when dealing with these situations.’

The number of people that could be due refunds is unclear, though Tilley has said that, ‘without a shadow of a doubt, it could be in the thousands.’

Cornerstone’s estimates suggest that this could have affected between 3,000 and 5,000 people each year since 2007 when the stamp duty system was last reviewed, amounting to between 45,000 and 75,000 total cases.

Cornerstone specialises in seeking tax refunds on behalf of those who may have been wrongly charged stamp duty, and charges a fee for those that are successful.

It has lodged 38 refund applications on behalf of business owner clients who have transferred commercial properties in joint ownership into SIPPs or SSAS pension wrappers, all of which have been successfully refunded by the taxman. There are a further 12 cases currently underway.

Cornerstone’s Chris Ward told This is Money said that the issue was down to a ‘lack of knowledge on the part of pension providers, financial advisers and accountants, though he admitted that the stamp duty rules were ‘complex’.

He added: ‘Lawyers and pension trustees have been in denial but they are now coming to see that this is a major issue’.

This is Money asked HMRC to clarify the rules around when stamp duty needed to be paid when transferring properties into pension funds.”